Livingseas Asia is an organization dedicated to coral restoration by using reef stars. They’re also aiming to expand to seaweed and seagrass conservation to create an overall healthier marine biodiversity.

We sat down with Leon Boey, founder of Livingseas Asia to learn more about how they started and how they’re moving forward.

What made you focus on coral restoration? How would you relate it to climate change and taking climate action?

I started out diving around the region. I’ve been around the South East Asia region and to places like the Philippines and Malaysia. It’s been over 15 years since I started diving and I tend to go back to the same places over the years. I noticed that the corals aren’t getting any better. I’ve seen it when the corals were good and I’ve seen them when they were destroyed. Unfortunately, they don’t recover on their own.

Most people that go diving look for the big things. My favorite thing to do is to go to places where there are a lot of corals and fish. There’s life on top and below. I noticed that when the corals die, the fish leave as well. I really wanted to do something about it so I started researching, traveling, joining projects back in 2008/2009 and just learning about corals.

That’s when I really started doing my own projects, and eventually started our own coral project in Bali and it has grown to what it is now. I see corals as the base of the entire marine system.

It’s like when you go birdwatching. You look at the birds but don’t notice the trees. Corals are part of the background and people don’t give it as much attention as it deserves.

Can you describe one moment where you thought that you want to establish Livingseas?

I don’t think there was a specific time or moment. It just grew on me as I went on. I have been diving for a while, so I’ve seen a lot of beautiful places that many divers go to.

After you’ve dived for some time you would’ve seen a lot of stuff, traveled to a lot of places and I think that there’s one realization that a lot of divers come to—we all wanted to do something else than just diving. I’m not a marine biologist but I am very passionate about it, so I just read a lot of books that inspire me to do something about life underwater. A lot of it was experimental. 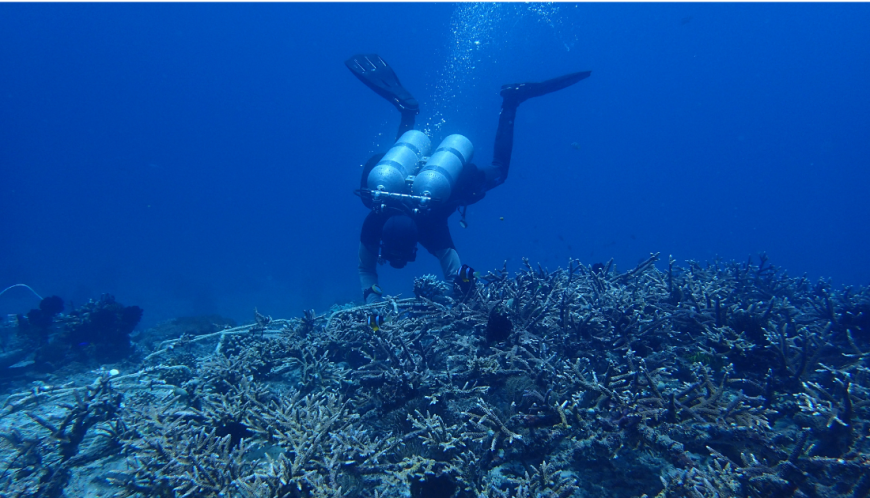 What are Livingseas’ main challenges right now? Any blockers that you’d like to address in the nearest future?

Livingseas started out as a diving company then we focused on education and travel. Conservation is something that we did as a side project because we were interested and we wanted to learn more about it.

Since the start of the pandemic, we haven’t had enough business. We decided to switch focus and work to scale this up to start moving the conversation in a big way.

Challenges are mainly financial since we’re not getting much income from tourism anymore because of COVID. Now we’re seeking partners like Handprint or other NGOs. One good thing is that a lot of people are getting interested in corals and the diving community is responding in a good way. Luckily, we have a range of things that people visit us and it has been helpful but still nothing like it was before. 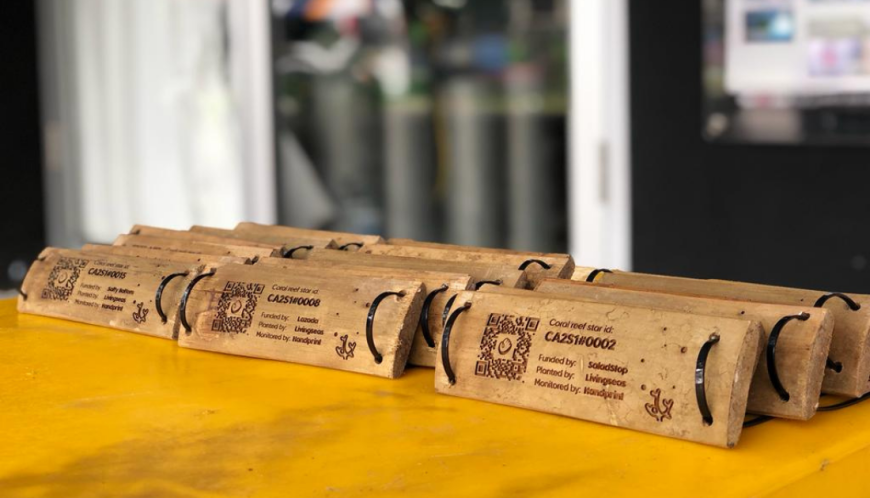 With the recent partnership with Handprint, how do you see the platform helping you in your mission?

One of the things I spoke extensively about with Handprint’s co-founder, Mathias, is his vision for Handprint. There are a lot of people who want to do good but it’s difficult to match them with people who are doing the good.

I don’t come from a large, international NGO so small operators like myself are very supported by your mission. Handprint helps corporations make investments and make sure the funds go to the right place rather than going through middle management. I think Handprint’s mission is very helpful and I’m looking forward to getting more involved.

What are your main 2022 projects or initiatives, and how can people and businesses support you?

One of the things we realized is that we need the engagement and participation of the local community. We decided to come out with social programs again. A lot of people, especially locals, don’t have the opportunity to dive. It’s not a common activity and it’s mainly for tourism so we wanted to give opportunity to the locals to witness it themselves. Not just to see what’s above the water but to also see the other half of it.

We started with a group of six girls, ranging from 15 to 16 and we’re teaching them about marine issues and climate change. Every month we’ll have a meeting to watch movies and talk about how this problem isn’t just global but also local. These girls would present what they learned in a local community center. So they gain knowledge and they spread it out to the population.

In 2022, we’re also going to try seaweed conservation. That’s actually more beneficial for climate change than corals. Corals’ benefits are mainly biodiversity. There’s not a lot of carbon capture there. We want to do seaweed, partly for income generation so that will help the local community and reduce their reliance on tourism specifically.

The next is seagrass. There’s a lot of seagrass in the area and because of foot traffic, a lot of those seagrasses are decimated. We want to try rebuilding that or move them to a place that’s a bit safer.

What are you most proud of today, with Livingseas?

I’m proud of starting this project during a pandemic. The team and I really buckled down and got it done. I think a lot of other dive centers have not survived. We’re the busiest one in my area and because we have this project, it keeps us going. The project allowed the team to stay motivated and employed. For me, it’s not just about the corals but also about the people.

We use cookies on our website to give you the most relevant experience by remembering your preferences and repeat visits. By clicking “Accept”, you consent to the use of ALL the cookies.
Cookie settingsACCEPT
Manage consent

This website uses cookies to improve your experience while you navigate through the website. Out of these, the cookies that are categorized as necessary are stored on your browser as they are essential for the working of basic functionalities of the website. We also use third-party cookies that help us analyze and understand how you use this website. These cookies will be stored in your browser only with your consent. You also have the option to opt-out of these cookies. But opting out of some of these cookies may affect your browsing experience.
Necessary Always Enabled
Necessary cookies are absolutely essential for the website to function properly. These cookies ensure basic functionalities and security features of the website, anonymously.
Functional
Functional cookies help to perform certain functionalities like sharing the content of the website on social media platforms, collect feedbacks, and other third-party features.
Performance
Performance cookies are used to understand and analyze the key performance indexes of the website which helps in delivering a better user experience for the visitors.
Analytics
Analytical cookies are used to understand how visitors interact with the website. These cookies help provide information on metrics the number of visitors, bounce rate, traffic source, etc.
Advertisement
Advertisement cookies are used to provide visitors with relevant ads and marketing campaigns. These cookies track visitors across websites and collect information to provide customized ads.
Others
Other uncategorized cookies are those that are being analyzed and have not been classified into a category as yet.
SAVE & ACCEPT